Pose Wiki
Register
Don't have an account?
Sign In
Advertisement
in: Pages with reference errors, Expand articles, Characters,
and 3 more

Indya Moore
Angel Vasquez-Evangelista is a former member of the House of Abundnace, leaving alongside Blanca Rodriguez, a former escort, and a former employee for Show World. While working one night by the Piers, she becomes romantically invested in her newest client Stan Bowes. Despite repeatedly being let down, she continued having relations with him until the unexpected meeting with his wife Patty.

Years after the affair ended, she continued to engage in sex work before being pulled aside by her house Mother, who motivated her to take on a career in modeling instead. Despite fears of being clocked by the eyes on her, Angel became a recurring client under Miss Ford and the Ford Agency. She also becomes romantically involved with Lil Papi Evangelista.

Angel, assigned male at birth, lived with a mother and father. A day in her childhood, she stole a red leather pump shoe and took it home. She attempted to sneak the shoe into her room but it dropped from her coat. Though Angel begged her parents to keep it, she received a slap from her father; her relationship with her parents ultimately changed since the incident ultimately leading to her running away.[3]

Angel was brought to a leased, furnished apartment by Stan Bowes. Becoming intimate, she requested that on Christmas Day he visit her, even if it was to only last for an hour. Stan never showed up.[3]

After being encouraged to pursue her dream of modeling by Mother Blanca, Angel was escorted to a try-out for new models. Separated from Blanca and Lil Papi, she met Miss Ford who, having informed her in needing professionally-taken photographs, arranged a photo shoot for her with a friend. Regrouping later, she tells the good news to her house family.

A day later, she visited the photographer Andre Taglioni and his crew for the photo shoot. During preparations, Angel conversed with Taglioni, Taglioni commenting that he was familiar with her from the Piers; she also admits that she would not be able to pay for a complete set, offering to settle an arrangement. Afterwards, the two and company captured her in various outfits, poses, and backdrops throughout the evening until they remained and were alone. With the camera forced on her, Angel was instructed by Taglioni to undress fully and was photographed.

Walking a ball category and receiving grand prize, Angel ran out from the room and weeped in the corner before being approached by a concerned Blanca and Lil Papi. With their attempts to comfort her, she revealed to them that the photography, having clocked her from her prior escort days and knowing she could not pay for the photos, had captured her nudity, expressing a fear he would use the images for pornographic magazines. Her house Mother and sibling enraged by this revelation, the group went to Taglioni's studio, Papi beating the photographer while Blanca and Angel searched for the photos for Miss Ford as well the collection of naked pictures and the negatives.

Meeting with Miss Ford with the professional photos, Angel whispers to her that she would not know the efforts taken to be allowed into her modeling agency.[6]

Falling Out and Career Revival

While visiting her sickly mother Blanca Evangelista at Roosevelt Hospital, Angel mentioned that during a photoshoot, she encountered a queen from the ball scene; she went to see Miss Ford at her office after the visit, being informed that she had been clocked, contracts being pulled from different venues.

She sought her apartment, drinking heavily alone until the arrival of Lil Papi Evangelista. She told Papi that they found out about her transgender identity through a queen from the balls and repeatedly said she would not be able to find work. During one evening, Angel was approached again by Papi, being shown a business card for Esteban Martinez Talent Management. Though he told her that she would be one of his cilents, she rebuffed that she would need legitimate work opportunities.[7]

Finding her success in modeling in Europe under the Esteban Martinez Talent Management in early 1990s, Angel continued to smoke cocaine in secret as she anxiously await new modeling gigs from Lil Papi.[8]

Snarky, occasionally immature, and fittingly prone to drama, Angel seeks validation and love. She hopes to survive and succeed in a world that repeatedly discards her. 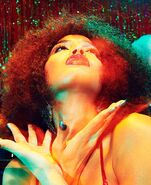 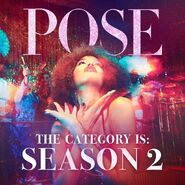 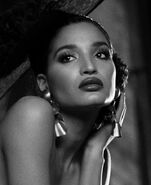