Angelica Ross
Candy Johnson-Ferocity was a young, bold woman within the New York City ballroom scene that set her eyes on shining and being seen. She lived in the House of Abundance as a child of Elektra after running from home, where she shared her experience with her house sibling Lulu Abundance. Repeatedly, she fought against the judgments of Pray Tell to strive in other categories, going as far as to risk body modifications through silicone injections. When the House of Abundance began to collapse due to financial failings, Candy leaves and co-parented a new house with Lulu.

Dealing with the struggles of maintaining their living situation for their house, Candy took on two occupations within the sex trade: providing services at the strip club and taking in johns in a sleazy hotel. Unexpectedly, she had the rest of life taken from her, her legacy lived on through a category titled "Candy's Sweet Refrain" dedicated to her as a final wish, orchestrated by the Emcee Council.

Candy, assigned male at birth, was the child of Darnell and Vivica Johnson, living with one sister. During her childhood, she exhibited some dysphoria, playing with her sister's dolls and trying on her mother's wigs and make-up. Though her mother Vivica did not know how to react to the actions, Darnell quietly supported her, even gifting her a doll house one Christmas while Candy pretended to sleep.

Candy eventually left her home, feeling uneased but seeking to transition into a woman on her own. She relocated to New York City, eventually being taken in by Elektra Abundance.[2][1]

Living under the House of Abundance, she bonded with Lulu Abundance, the two women becoming an inseparable pair, and walked the ball with her siblings Blanca, Angel, Cubby, and Lemar. Before one ball in 1986, Candy followed by her Mother and siblings to the Museum of Fashion and Design, finding the exhibit with royal clothings on display. Hiding from the sight of guards, they gathered all the robes and jewelry into trash bags, broke their way out of the building, and raced to the ball, wearing the different outfits they had stolen. Eventually, she was arrested alongside the family but was shortly released.[3]

With the exile of Blanca Rodriguez from the House, Candy continued to walk the ball categories under the wings and guidance of House Mother Elektra, often challenged by the new House Evangelista.[3][4]

In December 1986, she and Lulu joined in an afternoon scheme to steal Salvation Army donations outside a business. As part of the plan, she gave a donation, while Lulu performed a diversion for Elektra to clip and run with the backet of money. The three counted out the amount and celebrated over using the newly acquired money to properly celebrate the Christmas holiday with a tree and presents for themselves.[2]

Candy, alongside the children of Abundance, attended a ball, sipping drinks and watched as Pray Tell and the judges scored various plus-sized women in a body category. As she uplifted herself to attempt a walk in the category, she was repeatedly discouraged to do so by Elektra; instead, Candy finished her drink and strut into the middle of the room, the audience and Pray Tell booed her, the emcee striking her down for the walk. Persistent, she demanded to receive her score, the judges giving her all sixes.

Smoking a cigarette outside the ballroom, she is approached by Angel, who attempts to offer comfort and support. Though Candy pushes that Angel passes and could win more trophies than other girls in the hall, she became convinced that she could be helped in getting a new body through silicone injections from a nearby physician. The following day, the two women visitied Clarissa, being informed that she would perform small doses of silicone for a steep price.

Candy goes to another ball, receiving immediate criticisms from Mother Elektra about her unconvincing body modifications. Walking in another body category, Pray Tell and the audience comment negatively on her performance, a woman in the crowd becoming confrontational with her. Before walking out of the building, Candy proclaimed that she was done with walking alongside House Abundance and dealing with Elektra's words.[5]

Candy, accompanied by Angel, visits another woman in the city for injections for cheap. Arriving at Miss Orlando's place, the two were taken aback by her appearance, but Candy gives her money for an injection in her thighs.

At the next ball, she prepares to walk the body category, though she feels a feverish aliment. After a pep talk from Angel, Candy walks onto the floor, having the crowd cheer her on, Pray Tell complimenting her on the body changes, and the judges scoring her high. She slowly suffered from heat exhaustion, collapsing on the floor.[5]

Candy prepared with her siblings for future ball walks before being interrupted and rudely spoken to by Elektra. She was informed that she and Lulu would have to move out of the available room for them in the apartment. During one evening, she engaged in a dispute with the siblings over an eviction notice before the arrival of Elektra; she and Lulu aired their greviances in relation to Elektra's mistreatment since her break from her financer and chooses to leave the house to establish their own new ballroom house, taking Cubby and Lemar.

At a bar, Candy drank with Lulu as they plotted who to bring into their house. The two agreed to invite the boys alongside the girls Veronica, Florida, and Aphrodite from Xtravaganza, citing each for their strengths for the balls. In creating a name for them, Candy initially suggests "House Fabulosity" but was rejected by her co-Mother Lulu; they settle for Lulu's suggestion for "House Ferocity" and celebrate on their newfound family. She also adds the recently disowned Lil Papi as a form of retaliation to Blanca Evangelista.[6]

Candy attended to performing sexual favors in a motel. During one night, however, her client attacks and kills her, leaving her body in the closet of Room 44, later discovered by a maid two days after the incident.

Through efforts between Judy Kubrak, Elektra Wintour, Angel and Blanca Evangelista, her body was brought to the funeral home and prepared for service the approaching days. In spirit, she expressed forgiveness to Pray Tell and her parents, and expressed support for Angel and her co-House Mother Lulu Ferocity.[1]

When Pray became sick from his HIV medication, he was hospitalized. After being sedated from witnessing his roommate's death, Candy re-appears to him from the afterlife to coax him to join her, saying that she was the happiest she has ever been. During this conversation, it is revealed that Candy was also HIV-positive but she noted that she took all the necessary precautions with her clients to prevent transmission.

When Angel and Blanca went to enjoy the water, Elektra and Lulu had a heart-to-heart about their regrets and Elektra confesses that she missed Candy and wished that she was here at the beach with them. Elektra also noted that one of her biggest regrets is not walking up to Candy's casket during the funeral.

During the ride home when the girls were singing along to "Hold On" by En Vogue, Elektra sees Candy appear in the back seat between Lulu and Angel. While charismatically lip-synching along to the song, Elektra looks at her daughter fondly through the rear-view mirror.

Prior to Angel's wedding, Angel, Blanca, Lulu, and Elektra were participating in the gift-giving tradition of "something new, something borrowed, and something blue," where Angel was gifted Candy's old hammer. Later, Candy re-appears playing on the piano in the room to talk to Angel, specifically to dispel Angel's survivor's guilt.

Though she often shares her space with her "twin" and House sister Lulu, Candy, on her own, is an outgoing and outspoken woman who pushes herself and her image into the light, even in moments that she feels ridiculed or chastised for doing so. Despite the repeated criticisms from the testy Pray Tell and discouragements from Elektra, she walked in several categories where she received the lowest of scores, being pushed to seek risky body modifications from Miss Orlando for cheap.

Candy shares a much more palatable and friendlier attitude with Lulu, the two women rarely inseparable and acting as though they are always linked and in synchronicity. 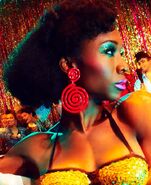