Dick Ford met and established a relationship with Elektra Abundance; though he is frequently busy with business affairs and travels, he returns to New York City, venting through sexual pleasure with her. The two managed a long-lasting relationship for ten years, Ford granting her an allowance in his absence.[1]

Returning from his trip to London, Ford met with Elektra in his room. Leaving the shower, the two conversed briefly before engaging in intercourse. He was, then, asked about providing funds for Elektra's sex reassignment surgery, prompting him to cover with a rob and decline to gift her money to transition, unable to express why he prefers her in this body.[1]

Having another encounter months later, Ford and Eletkra become intimately close to one another; Ford caresses her legs until he discovers that she had received the operation. Upset, he began to clothe himself, expressing that he wish to break from Elektra and requesting that she left his hotel room.

Quickly, he strikes a new affair with a different woman and barred Elektra from any further contact with him.[2] 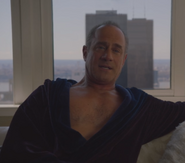