Dominique Jackson
Elektra Abundance-Evangelista is the former shrewd house mother and reigning champion within the ballrooms. Establishing her name and taking in the newest face Blanca Rodriguez, she develops her own House of Abundance, continuing to show her talents through many categories she and her children walked. Gradually watching as her house collapsed due to financial fallings with her suitor, she sought refuge under the wings of Evangelista.

In 1982, Elektra watched as ball performers walked for a femme queen category. Out of many of them, she witnessed a young woman walk the category and be ridiculed by the emcee as well as the audience laughing. The two women momentarily share a gaze before Elektra expressed surprise as the woman demand the judges give her a score.

Later, with the ball concluding and carrying her grand prize trophy, Elektra encountered the same young woman being verbally insulted by a group of women. She confronts the women, shading them for their appearance and choice of occupation. As she walks away, the woman apologizes for the women's pettiness. Elektra questioned how long ago has she ate, offering to take her to a nearby 24-hour dinner. The two women conversed about the balls, the woman introducing herself as Blanca Rodriguez and stating that she wished to be seen and perfecting her craft for the balls. Elektra asked for the check and informed Blanca that she was taking her under her wing as her mother.[1]

Taking on a new occupation at the Hellfire Club, Elektra began to return home later than normal, dressed in new clothing. Though the children comment on her high fashion, Blanca notes the late arrivals and makes the demand that Elektra would join them in a die-in protest at the St. Peters Catherdal, which she rejects. She dedicated part of her time between Indochine and her new job to construct her elaborate dress and scene to walk the French Revolution category for the ball.

After her presentation, she wins grand prize but receives many flaring remarks and insults from emcee Pray Tell, who announces Elektra's absence at the protest and her inaction to support her queer peers. Elektra attempts to fight back against his words but is left speechless after his departure from the ballroom. Weeks after the dispute, she returns home late, questioning the empty plate at the dinner table and commenting on Pray's behavior from the previous ball. Soon, she raises her voice, boasting that she did not need to be under Blanca's roof or to be a part of Evangelista, making the decision to leave the house rather than be kicked by House Mother and threatened not to see Blanca's face in the upcoming balls.

Elektra walked to the House of Ferocity, telling its House Mothers Lulu and Candy Ferocity that she was joining them.[3]

Elektra carries a heavy persona alongside her in the ballrooms, casting her image to be a fierce force and a guide for the women of her community. She views herself highly, often overshadowing her own daughters Blanca, Lulu and Candy.

Despite her harsh demeanor and reluctance to expose her vulnerability and insecurities, Elektra has expressed moments in which she becomes open with her daughter, especially with Blanca. With the collapse of the House of Abundance, she fell onto Blanca and her house for company and assistance. 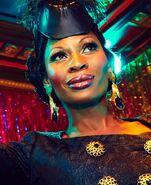 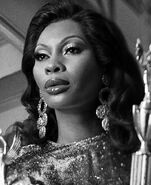 “You have something rarer than beauty, though. You have heart, and you're not afraid to lead with it. That quality will get you everything.”
—Elektra Abundance to Blanca Evangelista after her first ball[src]

“Look at the fruits of my labor: a foolhardy chunk who makes her living on the pole and a brainless wonder who thinks the way to get curves is to stick Charmin in her drawers or to inject cement into her derriere. House of Ferocity? You two are about as fierce as my morning corn flakes. You may have left my home but you can't leave me. I'm in your mind, that voice saying, "You're not good enough, little girl. You're not smart enough or tough enough or glamorous enough to make it in this world." And that little voice is going to eat away at you like termites until your whole pathetic house come crashing down. You think you're on the road to being legends but you couldn't make it from here to the door without me pointing the way. You're nothing but bags of rancid, rotting meat. Well, take a long last look at this filet mignon. I doubt we'll be conversing ever again unless I take a sudden interest in dying of boredom.”
—Elektra Evangelista to Lulu and Candy Ferocity[src]

“If they don't grow strong enough to rebel, to reject you, to move away, then you're not raising men and women; you're creating parasites... You want gratitude? Get a puppy.”
—Elektra Wintour to Blanca on being a house mother[src]

“A popsicle in this heat is like throwing a snowball in hell.”
—Elektra Wintour to her daughters on a hot summer day[src]

“God may have blessed you with Barbies, a backyard with a pony, a boyfriend named Jake, and an unwanted pregnancy that your father paid to terminate so you could go to college and major in being a basic bitch... none of these things make you a woman. Your uniform of J. Crew culottes, fake pearls, and 50 cent scrunchies can not conceal the fact that you do not know who you are. I know our presence threatens you. We fought for our place at this table, and that has made us stronger than you’ll ever be. Now pick your jaw up off the floor and go back to your clam chowder and shallow conversations. My girlfriends aren't going anywhere.”
—Elektra Wintour to a woman complaining about her table in a restaurant[src]

“Come judge for me.”
—Elektra Wintour to the women chosen to judge the emcees' first time in drag[src]

“Ambition never sleeps, daughter.”
—Elektra Wintour to Blanca after the Hellfire Club is raided by the police[src]