Dean of the New School for Dance
Dance Instructor

Helena St. Rogers is the Dean of the New School for Dance and a renowned dance instructor who takes a special interest in Damon.

During the passing winter month, Helena took a trip to Roosevelt Hospital, silent and keeping to herself until she reached her floor, signed in, and walked to the room of her student Tony. She watched as he swayed before approaching him, requesting that he return to bed; pushed away and Tony ripping his IV from his arm, Helena screamed for a nurse to restrain him. A moment later, she spoke to him, informing him that he was dancing while she attempted to comfort him.

Returning to the classroom, Helena was briefly called away from her students for a phone call from the hospital. She had been informed that Tony had passed after her prior visit and was unable to provide contact information to his birth family. Holding in grief while instructing the class, she notices Damon's late arrival, stopping class to instruct him that the students were past warm-up exercises. The two eventually argued over the tardiness and Damon's distractions outside the classes. Ultimately, Helena cited him upon mentioning attending balls, demanding that he leave her class.[2] 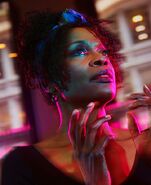 Retrieved from "https://pose-fx.fandom.com/wiki/Helena_St._Rogers?oldid=3789"
Community content is available under CC-BY-SA unless otherwise noted.