Love Is the Message

Sandra Bernhard
Judy Kubrak is the nurse at Roosevelt Hospital and an HIV/AIDS activist member of ACT UP. She befriends two patients, Pray Tell and Blanca Evangelista, after each received their positive diagnoses, often checking on their conditions and providing her personal aid in their fight to survive; she also brings them into the world of activism.

Judy Kubrak studied medicine, graduated, and is employed at Roosevelt Hospital as a nursing physician, working primarily on the AIDS-ward, where she regularly monitored them until their passing moments. She also joined the activist organization ACT UP and became romantically involved with a woman named Wanda.[1][2]

Judy was approached by Blanca Evangelista and Elektra Wintour to aid in the release of Candy Ferocity's body from the morgue. At the hospital, they spoke with Stanley about signing over Candy to Blanca and Elektra, casting any punishments onto her if they were caught; much to his reclutance, she was able to give them Candy for a proper funeral.

She and Wanda attended the funeral to mourn. While there, she spoke with Blanca about Pray Tell's changed mood on taking AZT.

After the funeral, she was approached by Pray Tell, the man seeking AZT to continue his fight to live longer with his ballroom siblings.[3]

After Pray Tell was rushed to Roosevelt Hospital, Judy and Blanca Evangelista stood by his bed as the doctor informed him that he was expecting ill-effects from AZT that caused his platelets to decrease. She regularly monitored his condition while aiding in the planning of the upcoming annual AIDS cabaret.[4] 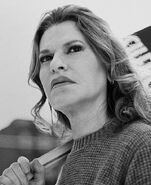