Pose Wiki
Register
Don't have an account?
Sign In
Advertisement
in: Expand articles, Articles to revise, Characters,
and 4 more

Angel Bismark Curiel
Esteban Alberto Martinez-Evangelista, commonly known as Lil Papi, is a young man who, having lived long on the streets of New York City, is taken into the wings of Blanca Rodriguez and her new house. Against the rules for his keep, he regularly sold drugs in secret to stay afloat. When he caught and forced out of the house, Papi relocates to Pito, continuing to deal on the streets until his arrest prompted him to find a new home within the ballroom community, briefly in the House of Ferocity but being brought back to Evangelista.

Esteban managed to receive his GED through the years back in Evangelista and becomes romantically invested in Angel. He supported her career path into modeling, wishing to take on the role of manager.

Papi had previously lived between foster families before he eventually left to the streets; he also dropped out of high school. While in New York City, he befriends Pito, who took him in, giving him the opportunity to sell and distribute drugs; Papi had also engaged in one sexual encounter with a man.[2][3]

Having witnessed newcomers House Evangelista challenge legendary House Abundance, Lil Papi approached Blanca Rodriguez and her children outside the Ballroom, requesting to join their house. Though he was informed that they had not won the walk, Papi wished to join now and work alongside them. Before he briefly left to retrieve his belongings, he was informed by Angel that the house had rules that included no use or distribution of drugs, no gentleman calls, and any collected resources are shared amongst the children.[4]

Papi encountered and walked with Damon, in which the two conversed about the trip to watch ballet on stage. When asked to see him someday performing, Papi joked about the price of attending. A whistle redirects his attention to a man with whom he offered drugs. Though Damon warned about selling drugs publicly, Papi informed Damon that Blanca could only know if he were to speak about it. The two eventually separate, Papi riding his skateboard away.[5]

Late for the Ball, Papi answered a call from a woman at the door. After asking if she was an undercover police officer, he attempts to offer her marijuana; though she asked about Angel and offered to drive him to the Ballroom, Papi excitedly grabbed his jacket and hurried. He also persuaded her to join in entering the building before regrouping with House Evangelista.[7]

Readying to walk in the upcoming Ball category, Papi and others once more commented on Pray Tell playing Love Is The Message again, though Blanca informed them that Costas Perez had passed away recently and to be sympathetic of his grieving. Dressed in a green track clothing and chains, Papi walked on the floor and found himself astonished as the judges gave him a perfect ten score, winning Grand Prize.[8]

Blanca discovers Lil Papi's pager. She questions Angel, Damon, and Ricky with Ricky eventually breaking and telling her that Lil Papi had been dealing drugs and kicks him out of the house forcing him to return to living on the streets.[2]

Lil Papi encountered Blanca outside the ballroom halls. He disclosed that he had been arrested a night prior and moved away from selling drugs; he also informed her that he joined a different house headed by Lulu and Candy Ferocity.[2]

Attending the balls for the night, Papi continued to serve his Mothers Lulu and Candy Ferocity; missing Lulu's drink order, he was ridiculed, though he blamed that the music left him unable to know what she wanted. Papi, then, watched as Elektra Evangelista approached to co-Mothers of Ferocity and began to read them both in the presence of ball attendees and the other children of their house, he standing in shock and awe. He was invited to leave the House of Ferocity, rejoining the House of Evangelista, which he agreed to do. He was followed by Cubby and Lemar.

Set to perform a house challenge against the House of Ferocity, he participated alongside Ricky in displaying butch queen realness.[9]

Papi grows closer to Angel, slowly builds a relationship with her. In the season 2 finale, He decides to have his own modeling agency for young and aspiring transwomen and be Angel's manager, so she can continue her modeling career.[11]

Lil Papi is street-wise and savvy. He has a playful and optimistic attitude and has a sibling relationship with the children of the House of Evangelista. 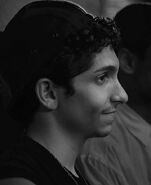 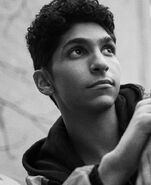 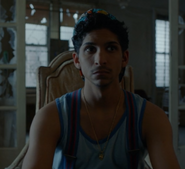