Pose Wiki
Register
Don't have an account?
Sign In
Advertisement
in: Expand articles, Articles to revise, Characters,
and 3 more

Hailie Sahar
Lucinda "Lulu" Evangelista is an exotic dancer based in New York City who is a member of the House of Abundance. She develops a strong sibling relationship with Candy Johnson while in the house, the two bringing in their talents in the categories they walked. When financial conflicts arise for Abundance, Lulu left the house, taking her siblings with her, and starting her own, the House of Ferocity, that was co-parented with Candy.

Lulu continued to serve as house Mother, despite the passing of her sister, and the struggles that came with maintaining it. After taking part in an ACT UP protest with Damon Richards and Ricky, she sought to restart her college education, seeking to attend the Bronx Community College.

Lulu enrolled in community college, studying accounting, but dropped out.[1]

She joined the House of Abundance and was quickly befriended by her House sister Candy Abundance and shared a space with another sister named Blanca Abundance. Though they lived in a cramped space, the women made the most of it, even when three new more members, Angel, Lemar, and Cubby, came into the picture.

During one night, Lulu assisted Mother Elektra in reclaiming her trunk of fineries that provided a bigger apartment, much to her and Candy's elation.[2]

Lulu practiced a ball routine alongside her siblings, the four taking a break after Lemar critiqued Candy's moves. While everyone chuckled, they were startled by the abrupt entrance of an angry Elektra Abundance. With Candy asking about Elektra's man and why she has returned to the apartment earlier than usual, Lulu questioned why she and Candy have to leave their room for her. She also listened as Elektra listed various different rules for the house.

Days later, Lulu and the children confronted Elektra on the eviction notice, informing them that rent was late. Eventually, Lulu proclaimed that she was leaving the House of Abundance, seeking to establish her own house like Blanca Evangelista, taking Candy with her.

The two women conversed in a bar, figuring out a proper name for their house and who to bring under their guide. She settles on the name "Ferocity" after rejecting Candy's first suggestion "Fabulosity" for being "too gay." Taking in Cubby and Lemar, the women's choice picks included shopkeeper Veronica, fellow voguer Florida, and former member of House Xtravaganza Aphrodite to challenge Elektra in femme realness categories.

Lulu and Candy came across Lil Papi on the street, deciding to take him under their wings as revenge against Blanca.[4]

Days after the ballroom incident between Candy Ferocity and Pray Tell, Lulu loses contact with her co-House Mother. Unsure what to do, she turned to Blanca Evangelista, informing her that Candy had began a side-profession of servicing johns at a sleazy hotel. With Blanca, the two women visited the establishment to locate their missing sister, being repeatedly shoed by the manager who expressed disinterest in their search. Though Lulu weepingly pleaded, she and Blanca gave him a number and a photo of Candy and left.

Lulu came to Apartment 306, pushing Blanca to tell her immediately where Candy was. Learning of her death, she embraced her sister and wept. She gathered at the table with Elektra Wintour and Angel Evangelista, planning out what to do moving forward, the group deciding to start preparations for Candy's funeral.

She became distant; while everyone sat inside the funeral home and paid their respects to Candy, Lulu avoided the casket, calling out Angel as she walked out of the room. She cryingly told her that she did not want to see her sister's body and that she was unable to remember anything positive the two shared in life, her mind dwelling on the bad moments they had together. Eventually, by Angel's hand, she walked slowly to the casket. Glancing at Candy's attire, she gradually became enraged, stripping the body of couple articles of clothing and jewelry before Damon, Ricky, and Papi pulled her off and away from the casket. Lulu stormed outside the funeral home, lighting a cigarette and sobbing quietly.[5]

Weeks after the passing of Candy, Lulu continued to feel grief-stricken, under performing at her workplace before her intervention with Blanca.[1] Once she makes peace and grows closer to Blanca and the others, sheds most of her mean girl ways, and Lulu gets nominated for Mother of the Year of 1991.

Though she attempted to re-enroll into college for her accounting degree, Lulu, still grief-striken by her lost sister and unyielding to handle the environment, sought drugs to relieve her pain. She stayed close to Angel Evangelista with her emotions and laced marijuana and has a recurring fling with a man named Jerome. Throughout 1994, she repeatedly became distant from Elektra and the others, leaving voice mail to alleviate worry but requesting not to be found.[6][2]

Unlike her vocal and ambitious sister Candy, Lulu tends to keep to her side and her shadow, reluctant to strive indepedently.

After Candy's death, Lulu struggles on how she'll keep the house of ferocity going. However, she eventually moves forward by building a stronger role as sole mother of her family, becomes nicer and more kindhearted by making amends with her former frenemies Blanca, Angel, and Elektra and become best friends, building a stronger sisterhood. 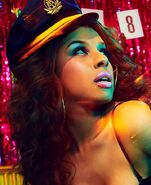 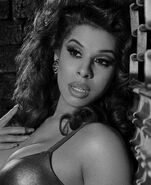