Pose Wiki
Register
Don't have an account?
Sign In
Advertisement
in: Expand articles, Articles to revise, Characters,
and 2 more

Billy Porter
Jordan Aaron Hall (young Pray)
Pray Tell, or familially known as Prayerful, is an emcee in the Ball scene, a member of the Masters of Ceremony Council, and a father figure to the children of ballroom, alongside a guidance for the House of Evangelista. A man that witnessed the repeated tolls of the HIV epidemic, he soon learns that he is diagnosed as HIV-positive, having to adjust his life while mourning his lovers' passings and getting support from his sister Blanca Rodriguez.

He finds a new hope through activism, brought to an ACT UP gathering by nurse Judy Kubrak. Pray Tell also loses himself in an unusual affair with a younger man after supporting him through his newest revelation of being HIV-positive.

Pray Tell, or Prayerful, was born and raised in Pittsburgh by his mother Charlene and her first husband. During his development, he was physically abused by his father for his effeminate demeanor in an effort to "fix" him. After his death and his mother's marriage to a second man, Pray suffered from sexual molestations from his stepfather Ernest at night despite his efforts to find help from Charlene.[3]

Into his teenhood, he sung in the local church his family regularly attended. He meets and falls for another young man named Vernon Jackson, the two sharing an intimate kiss unknowingly in the presence of his aunt Latrice. In his early adulthood, he snuck out at night to visit the New York City ballroom scene before returning in the dawn. During one night, he chose to leave his hometown for good to stay in the bigger city. Pray also attempted to persuade Vernon to join him in his escape to be with him over the church but was abandoned at the bus stop.[4]

Invited to Apartment 306 for the holiday dinner, Pray questioned Lil Papi's intentions with the wrapped gifts under the tree, requesting that he dropped it from his hand. A moment later, he, alongside the other boys, ran to the kitchen, seeing Blanca and Angel toss a burning turkey out the window and laughed the situation away.

House Evangelista decided to take to an open Chinese restaurant for their dinner. The group chose to open their presents first before eating, Pray gifted a camera from Blanca.[6]

During the balls, Pray had the DJ repeatedly play Love Is The Message between categories, which prompted Blanca to invite him for dinner with the House. Notably drunk, he presented aggressively, attacking and insulting the children before being intervened by Blanca; he soon explained his grief over Costas Perez's condition in the hospital, informing them that he was dying of the virus before barking that they leave him alone.[7]

A Change in Tune

After a time, Pray Tell and Keenan Howard grew apart, ending their relationship. Learning of his passing from pneumonia by others within the community, he, accompanied by Blanca Evangelista, visited Hart Island where his body was buried. The two view a potter's field that was being created for a mass grave of other victims of the virus before walking to wooded area, Pray placing a stone marked with Keenan's name, among the thousands, and saying a prayer.[9]

Pray Tell emceed the balls, the category being French Revolution. After witnessing Candy and Lulu's display as French maiden peasants, his eyes, with the judges and the audience, gazed their eyes on House Evangelista's Elektra dubbed as a high class French queen who mistreats her servants and is sent to the guillotine. Growing upset as the display went on, Pray Tell announces for the music to shut off and the audience to silence themselves, the emcee questioning Elektra's lack of atendance at a recent protest at St. Patrick's.[9]

Dinner and Change of Heart

Pushing through another ball, Pray Tell stood at the stage, critiquing the participants of the category. As he announced plans for the annual AIDS cabaret, he continued to sweat, experienced dizziness, and ultimately passed out onto the stage, Blanca Evangelista and others rushing to his side to aid him. He was rushed to Roosevelt Hospital.[3]

In his early childhood, Pray Tell suffered physical abuse from his biological father for his homosexuality and interests in expressing femininity. When his mother remarried, he experienced an incestuous sexual assault under the cover of night by his stepfather Ernest.

Pray Tell has mentioned that he has been unable to become romantically invested in his boyfriends, as every one has become a victim of the virus and passed. 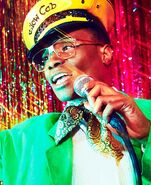 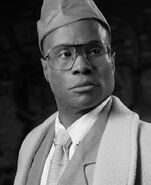