Ricky Wintour is a homeless young man living in New York City who becomes romantically involved with Damon Richards. He also becomes a child under House Evangelista, being cared for by Blanca Rodriguez.

Developing his talents, Ricky became a dancer, much like Damon, and sought a touring opportunity. During the tour, however, he engages in an affair another boy that danced for Al B. Sure!, the information leading to his separation from Damon and the House of Evangelista, into the House of Wintour. Learning that he is HIV-positive, he swooned towards an older man, a relationship that tore others apart.

Ricky approached Damon after witnessing the House of Evangelista win grand prize in the challenge. He introduced himself and congratulated him on the win.[2]

Ricky participates for the first time in the ballroom to compete and represent the House of Evangelista. He eventually places first runner-up. Later on, Blanca lets him join her house, under specific conditions. By Christmas morning, he gives Damon a christmas gift. Afterwards, Damon tells him he wants to have sex with him. Later that night, they decided to eat outside after both Blanca and Angel burnt the turkey. Before eating at a Chinese dinner, Blanca gives out presents, Ricky receiving a wristwatch as a christmas present and he tearfully thanks her.[3]

Ricky checks on Damon, who got sick. However, Damon questions him if he is HIV-negative, to which he replied that he doesn't know, admitting he has never tested. Damon eventually panics after learning the truth from him that he had slept with 50 different persons. Pray Tell meets up with Ricky, Damon and Lil Papi to have an HIV test. Days later, Ricky finds out that he is negatives and promises to practice safe sex, while grabbing condoms.[4]

Ricky spent the two years on the Al B. Sure! tour, Ricky returned to New York City, reuniting with his boyfriend Damon Evangelista. As a romantic gesture, the two locked lips and undressed until they were interrupted by Blanca Evangelista, informing them that they needed to dress for a friend's funeral.[7] 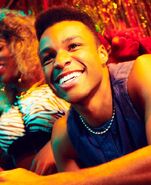 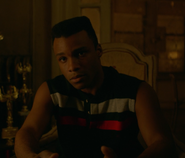 Retrieved from "https://pose-fx.fandom.com/wiki/Ricky_Wintour?oldid=3746"
Community content is available under CC-BY-SA unless otherwise noted.